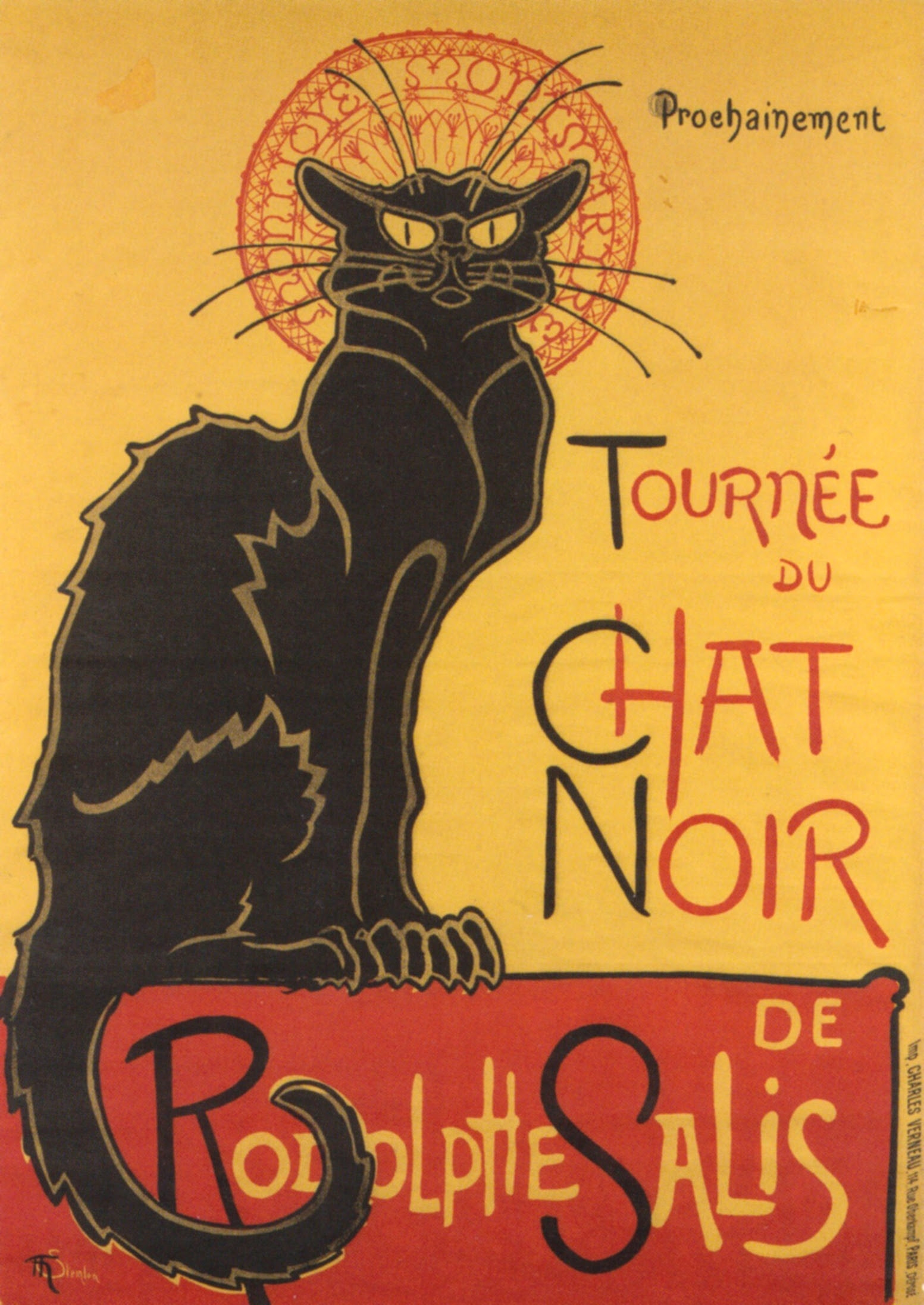 This week while reading the chapter exploring Art Nouveau I was reminded of the famous Théophile Alexandre Steinlen illustration for Le Chat Noir.  I had seen this work many times and was always drawn to it, but I never learned about Steinlen and his contemporaries or what Le Chat Noir was.  Our text makes a brief mention of this cabaret in Montmartre, France as a popular gathering place for artists and performers and that both Steinlen and Toulouse-Lautrec were frequent patrons.  This of course conjured up grand romantic images in my mind of the great artists of the time spending evenings drinking and chatting about their projects, sharing inspiration and good-natured ridicule of each other's work.  I'm sure the reality of it was far from this, but it was enough to pique my interest and sentimentality.

From the mid to late 1800s, Montmartre was a spot where many artists, liberals and bohemian types gathered and lived.  In addition to Steinlen and Toulouse-Lautrec, Montmartre was home to the likes of Van Gogh, Brissaud, Matisse, Renoir, Degas, Picasso and others. This trend reached it's peak at the end of the century when the nightlife and bohemian culture was in full swing and nightclubs like Le Chat Noir and Moulin Rouge were in full swing.  I can only imagine that such an environment made possible collaborative friendships like that of Steinlen and Toulouse-Lautrec and how significant these friendships are.  I instinctively draw parallels to other famous friendships among creatives and intellectuals, such as that of C. S. Lewis and J. R. R. Tolkien (and the rest of the Inklings), or that of Sigmund Freud with Carl Jung and Wilhelm Fliess.

Imagining life in 19th century Montmarte seems a stark contrast to social life in today's "internet age".  I find myself at a loss to find any equivalent social environment with such a wealth of creative and intellectual energy, and feeling more than a little lament at this fact.  It's arguable that Silicon Valley is to technological creativity today what Montmartre was to Art in the 19th century, but even here social life seems so dispersed.  Where's my Le Chat Noir?  Today technology seems to be making the world a smaller place, making information and communication increasingly more accessible, while simultaneously pushing us apart and increasing the social distance between people.  As information becomes more geographically dispersed and accessible, perhaps great minds no longer need to gather in places like Montmartre.  But what does this social change mean for artistic, intellectual or cultural movements?  How significant of a role did social environments like the cabaret nightlife of Montmartre play in the forming of movements like Art Nouveau?  Is there an equivalent social melting pot or think tank for modern creatives and intellectuals?  What if Steinlen and Toulouse-Lautrec were just Facebook friends instead of sharing their evenings in Le Chat Noir?  Does modern technology increase the potential for interaction and exchange between great minds, or is it a poor substitute for in-person social exchange?  Perhaps I'm just a hopeless romantic, nostalgic for a time long before mine, but I can't help but feel like we are missing out on some kind of "Le Chat effect" in our increasingly technology connected global community.